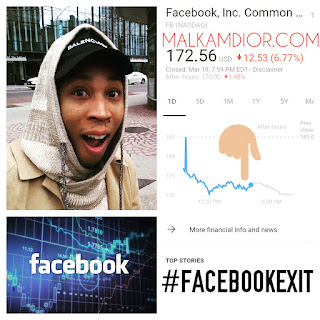 Millennials exit Facebook and now the hashtag  '#FaceBookExit' is trending online. (Malkam Dior)
Stop assuming that Mark Zuckerberg cares about democracy. I'm watching Facebook friends deleting their accounts. This friendly platform that helped us all stay in touch was weaponized for political gain and compromised our free and fair elections.

Stop assuming Facebook cares that they disseminate propaganda. Stop assuming that Facebook cares about America, Americans, or you. They want money. That’s all. "U.S. stocks finished sharply lower Monday, with the S&P 500 and the NASDAQ logging their worst days since Feb. 8, as concerns about Facebook Inc.’s management of user data sparked a selloff in technology shares.

The Federal Reserve’s coming rate decision has created some uneasiness, as investors are expecting the central bank to adopt a more aggressive path to normalizing monetary policy and lifting borrowing costs." according to MarketWatch. The firm used Trump campaign data from 50M Facebook profiles.

Facebook's SEO has become the most popular search engine for Millennials and the company has undoubtedly affected the way Americans interact with each other both on and offline. I know a lot of people on Facebook.


I deactivated my Facebook account about a month ago for other reasons, but the news of the way that user data has been harvested & abused is making me consider completely deleting it all and leaving Facebook for good.

Anyone else thinking similarly?

I assure you, they care plenty about the country and democracy. The issues at hand are not tweet-level simple. I would but at this point, I have too many friends overseas that this is the only extension to communicate with them.

I have deactivated currently for a breather, though. I suspect you're not the only person in that kind of situation. I know that when I lived in Belgium I found Facebook quite good for keeping in touch with friends back in the UK. To exit is harder than you think. I have bookmarked this site, for now.
facebook facebook exit facebook SEO hashtag market watch millennials Millennials Exit Facebook - #FaceBookExit - Malkam dior Nasdaq selloff weaponized Zuckerberg