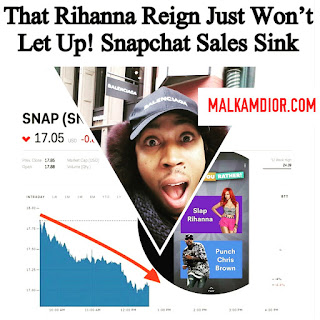 Rihanna ended Snapchat's SEO on the major Google search engine - Malkam Dior - Snap was already over after Kylie Jenner killed it, Riri put the final nail in the coffin. Snapchat is canceled. Big Sean allegedly cheated on Jhene Aiko, Stephen Hawking died, Cardi-B is pregnant & Rihanna ended Snapchat... all these in just this week. The POWER of celebrities is AMAZING.

“You spent money to animate something that would intentionally bring shame to DV victims and made a joke of it!!!,” she added, referring to domestic violence. “Shame on you. Throw the whole app-policy away.” according to Global Mail -

Snapchat is that one annoying person that never accepts its mistakes and says sorry, even when they know they’re wrong. Just accept the update sucks, and go back to the original layout!! I hate giving people my Snapchat because my username is hella stupid and I gotta explain to them that I was in middle school when I made it. Riri said, “throw the whole app-policy away.” She just ended snap right after I just get done typing some long paragraph on Snapchat and I slide it up to cover a zit or some shit and it gets deleted and put into the damn trash can.... only to find out that Rihanna just single-handedly ended Snapchat.

Snap serves no purpose anymore other than taking selfies and saving them into your camera roll. I’m so glad Rihanna called them out for their bullshit. Can you believe she officially ended the social media giant? They canceled themselves first when they switched the Story template. (Instagram Story) is where it’s at now!

Major investors aren’t going to sell due to this. They’re not going to sell millions of shares due to a bad ad. It's been over a month since the Snap's update and I'd just like to remind ourselves that we all still HATE it. What's Snapchat? Don't know her.