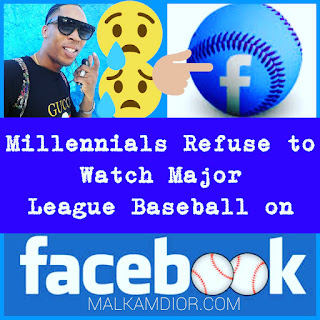 Millennials confirmed - watching a baseball game on Facebook was an awful viewing experience.


First, they sell our personal information now the Mets game is being aired exclusively on Facebook, how ridiculously stupid. I think it's dumb as hell.

According to ABC TECH NEWS - Facebook acquires exclusive rights to 25 Major League Baseball games. Facebook, Twitter, and Amazon and other tech companies are in a race to acquire sports streaming rights. - "Facebook is getting deeper into the professional sports streaming game, partnering with Major League Baseball to air 25 weekday afternoon games in an exclusive deal.

The games will be available to Facebook users in the U.S. on Facebook Watch, the company's video feature announced last August, via the MLB Live show page. Facebook said Friday that recorded broadcasts will also be available globally, excluding select international markets."

"Millennials refuse to watch MLB on Facebook because social media is a great platform to discuss the game after the fact, not while it's happening live. Social media is a major distraction from the game itself. MLB is forgoing regularly broadcasted games for Facebook exclusivity" - MalkamDior

Pro Tip:
I should note though that I think a connected TV video app requires you to have a Facebook account. If you have a smart TV you can probably log in to Facebook to watch the Phillies. I’m interested to see how it goes. I’m gonna watch before I rush to a conclusion on if it works or not.

I had my phone plugged in and started streaming at work...now am mirroring to my AppleTV just to watch. With that said, here I am logged into Facebook on my laptop that is connected to my TV via HDMI, ready for Mets baseball. Most Millennial MLB fans open their web browser and enter Facebook's website into the main search bar.

Not everyone has the hookups to their TV to watch a live game on your phone or laptop while sitting in front of a big screen TV. I have zero interest in watching a baseball game on Social Media, however before I blog about it, I'd have to try it first. The Mets v Phillies game will be live on Facebook tonight as well as MLBTV, Free Baseball, Nola v Syndergaard! I thought watching baseball on ESPN and Fox was bad. Then they told me I had to watch it on Facebook.

How to watch Wednesday’s Mets-Phillies game, which will be broadcast exclusively on Facebook

Not Pro Tip:
Millennials watching through Xbox wonder how many people over 40 were watching the game? I had no idea if you can stream baseball on it but I guess you can.  You should be able to watch on Facebook's video app, which is available on connected TV platforms like the Apple TV. This concludes our FB lesson.