Spotify Opens at $195.90 Valuing Higher Than Millennial Investors Were Expecting 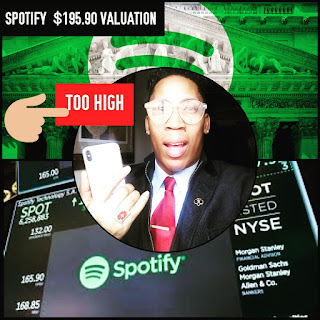 
Since they own the gateway (App Stores), they pocket 15% on Spotify subscriptions – so either Spotify has to charge more than them, or they operate at break-even, or at a loss. CEO’s and their boys leave nothing for investors now. Dropbox was going to open at $18 then opened at $28. This was supposed to open at $130 and then opened higher. 15% of anyone who uses an iOS or Android Spotify app?  I just do not believe Spotify will sustain for the long term;

"Spotify opened on the New York Stock Exchange at $165.90, giving the company a market value of $29.5 billion. The first trade didn’t happen until 12:45 pm Eastern. This is halfway through the trading day and a record for the latest opening time for a public debut. Shortly after the open, shares fell to a little above $160. The digital music company isn’t selling its shares on the stock market, meaning the company isn’t raising any money today. Instead, the event is known as a “direct listing,” is a collection of transactions from existing shareholders (like employees and investors) selling shares directly to stock market investors". According to Tech Crunch.

A streaming music service is NOT worth $30 Billion on its first day of trading once all the block-chain companies start blowing up with the music community. There will not be any need for a 3rd party distribution channel like Spotify. There are a ton of people on computers or other small devices that don't download via an app store. From what I know about Dropbox, I could apply the same logic. Don't know how they determine which users they take 15% from while Apple & Google can afford to operate at a loss for as long as it takes to kill the competition, Spotify cannot. This will not end well for them. Stay away. Stay far away.
Millennial investors New York Stock Exchange Spotify Spotify stock