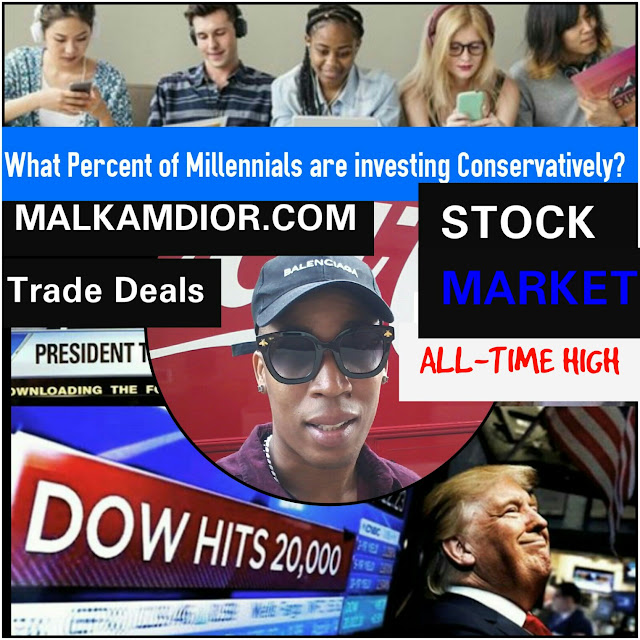 According to the report, 85 percent of millennials say that "The Trump Effect" influence their day-to-day investments.


I think these guys have figured out that they can make a lot of money with the tariffs. For example, Farmers are taking a good hit because of the Soybean tariffs, but I believe that commodities market traders see it as an opportunity. They can use this to buy low and sell high.

Pricing fluctuation on goods is not necessarily bad for the investor class who identify as millennial. As long as market demand doesn't really drop.

The bottom line is China is not going to stop using Soybeans and they have few choices of where to get them from. The only difference is that farmers will get a smaller share from lower market prices. These farmers' businesses aren't traded on the stock exchange.

I don't see consumer market demand changing so much. Until it starts producing significant job loss, I think the investment class is in good shape. The thing is that we don't export much value added stuff to China, Our US made products are not in any kind of decline because of this.

Productivity is still doing fine. Prices that we pay for Chinese made consumer goods will rise, but we haven't really seen that yet.


When that happens, consumer spending won't go down, just what average people get for a dollar spent will be less. You can argue that Walmart will sell a few less Chinese toasters, but they won't be bringing in less money in the process.


Maybe they can shed an employee or two that stocks shelves, but it's small. When you need a new toaster, you'll go buy one and spend $25 instead of $20. China will send us a few less toasters over the long haul, but that doesn't hurt the US economy much.

It could cost these companies a few jobs, but if they were using this steel to make goods that compete with Chinese products, don't forget that those products become more expensive too.


It balances out. Tariffs on Canadian and European products is stupid. But they had no cost advantage of cheap slave labor or government subsidies. It's in these areas that the "trade war" can have a significant impact long term.

Trade wars are a dumb idea, but it has been overhyped about massive layoffs and that sort of thing. In the big scheme of things, a relatively few people might lose a few jobs, but that's a lot less likely than some predict.

The guys who make money by moving money around aren't going to see less money moving. Arguably, they could see more, unless everyone cuts back on consumption.


So if you set aside this trade issue as a real threat to the economy, that leaves things like wages and profits. Wages are going almost nowhere. Profits and total revenues are up because of the huge tax breaks companies got.

"42% of Millennials are investing conservatively, compared with 38% of Generation X investors and 23% of baby boomers, according to the Fidelity survey. Millennials held 25% of their investments in cash, compared to 19% of investors overall, according to a Charles Schwab & Co. study of client data." - Forbes


They didn't share this extra money with employees, they shared it with investors. So that translates into a rising stock market. More money for investors.

The other thing is that the stock market is no longer based on the real asset values of companies anymore. It is far more fickle than that and is primarily an investing game. That said, the real value of the stock market is way overpriced now. So in some respects, it is a bubble.

China's growing domestic market may be able to pick up slack from decreasing international demand, but the purpose of the tariffs should be to protect jobs from Chinese trade abuses, and they can accomplish that goal even if the Chinese economy doesn't implode.

If tariffs incentivize Americans to buy goods not from China, then even if Chinese consumers by Chinese goods, at least with respect to the American market, American manufacturers (and manufacturers located in countries allied with us, if Trump stops the ridiculous trade war against them) will have a more level playing field.

Besides The USA isn't the only country to be hit by China's currency manipulation (among other things), the EU and Canada have also. I don't know much about Australia's economy other than the fact that tourists from the USA like the Great Barrier Reef (and kangaroos).
Millennial investors trump trade deals