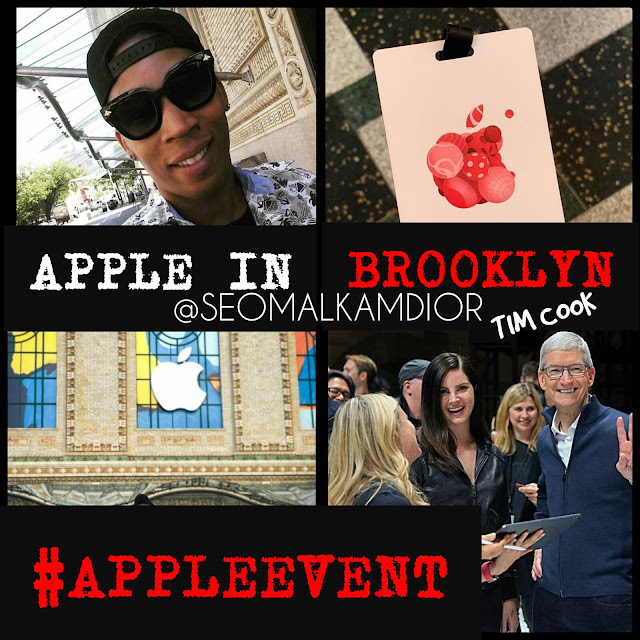 Missed Apple's October event? These are the key product updates to the MacBook Air, Mac mini and iPad Pro #AppleEvent

My life changed because I went to see Emma at the Apple Event (which was my first time seeing her) and it made me love her even more than I already did. There is so much more to tell you; hopefully I can post it all in this blog.

They say that it will be made with 100% recycled aluminum! Also, you can stack up the new Mac Mini to beef up your video rendering. It’s only a little suspicious that on the day of the Apple event my phone went from 50% to 11% after I unlocked it.


Still waiting for the app necessary for AFib detection on the Series 4 Watch. They pitched it and you need an app. That app hasn’t been released.


"According to Brooklyn Vegan - "Apple held one of its special announcement events in Brooklyn for the first time ever on Tuesday (10/30), and Lana Del Rey, accompanied by Jack Antonoff, ended the presentation with a two-song performance.


The press event was held at Brooklyn Academy of Music, which was transformed with the Apple logo on its facade for the occasion (and perhaps to match Apple’s Downtown Brooklyn location, which is right around the corner)."

I’m not sure I understand the new Mac mini.  It’s more expensive than an iMac, and doesn’t include a peripherals or a display... maybe its just the recycled aluminum.

It actually does. 8th gen processor and user upgradable ram. The cheapest iMac that lets you upgrade the ram costs $1799. Though it does include a 5K screen.

Apple claimed that the new iPad Pro can deliver the same graphics performance as an Xbox One S. A $1000 tablet that’s 3 years newer than a $225 console

I would hope so , but it probably still doesn’t. Good for them but unless they allow for a controller it’s just another shitty tablet trying to be a games console. The launch included 11-inch and 12.9-inch formats, A12X bionic chip and face ID.

Tablets many things but will never be a gamers choice no matter how good they become. Only way Apple would achieve a true handheld share is to work with Nintendo.


If Apple wasn't making lots of money on licensing the lightning connector they most likely would have switched iPhones to USB C a while ago. I just drew something on the new Apple iPad Pro with that nice, new Apple Pencil.

"Apple unveiled its latest iPad Pro models and Mac computers at an event in Brooklyn on Tuesday, offering long-awaited updates to some of its most popular devices.


I'm still looking forward to the app or device either by Apple/IOS or Android that'll allow us to tap WiFi, store it as mobile data and use it anytime.

"The tablets feature the same edge-to-edge LCD display that Apple introduced with the recently released iPhone XR, and they come with 11- and 12.9-inch displays. The Pro is thinner than ever and comes with sharper edges" - CNBC

In this blog, I've revealed everything announced at the 2018 Apple iPad event.

They do need to do that more often...the same goes for any other company.  Okay I give in, new iPad Pro is going on my ‘stuff to eventually buy’ list.

Making the Apple Pencil only compatible with new iPads is such a disgrace. I’m pissed off because I’ve been waiting for this new Apple Pencil and just got my 5th iPad Pro replacement the other day due to display issues not caused by me. anyways what a let down!