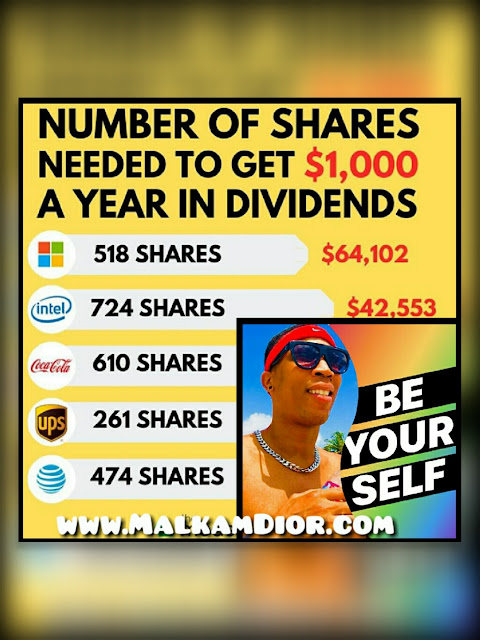 This is a visual way to understand the power of dividends. This is post represents the number of shares needed to get $1,000 of dividends/year.


I’m going to compile a comprehensive list of dividend stocks, with the first 2 on the list being:

In an article published in Yahoo Finance suggests that dividends and capital appreciation really opposite? No, but if one owns quality stocks the dividends don’t drop when the market does.


Dividend payments can really add up over the years. Dividends have made up more than 40% of the stock market's total return over the past 80 years, which is why investors should seek out companies that can consistently pay dividends in the decades to come.

We asked three of our Motley Fool contributors for the stocks they believe can pay dividends that could last a lifetime. They chose pharma powerhouse Pfizer (NYSE: PFE), renewable energy generator TerraForm Power (NASDAQ: TERP), and candymaker Hershey (NYSE: HSY). Here's why they believe this trio has the potential to pay dividends that endure.

George Budwell (Pfizer): Pfizer is set to reclaim its position as the world's largest prescription drug company by 2024, according to a report by EvaluatePharma. That's a truly impressive feat, given that this titan of the biopharma world has been getting slammed by patent losses for the better part of the last decade. In fact, Pfizer is set to lose exclusivity for another top-selling product soon: Lyrica, a drug that has historically made up nearly 10% of Pfizer's annual revenue. So the fact that a top-drawer pharma analyst firm still has Pfizer climbing to the top of the rock pile over the next five years is quite the accomplishment.

How has Pfizer managed to keep growing during this turbulent time? While the drugmaker's former management team attempted to go the mega-merger route by making offers for both AstraZeneca and Allergan, these failed deals turned out to be a blessing in hindsight. Pfizer's robust clinical pipeline -- and strategic decision to cut out high-risk programs early on -- has paid huge dividends over the past few years. As proof, Pfizer sports two of the world's best-selling drugs in the breast cancer treatment Ibrance and the blood thinner Eliquis (co-owned by Bristol-Myers Squibb).

What does this all mean for Pfizer as an income play? As things stand now, Pfizer offers a modestly above-average yield of 3.47%. The real selling point for income investors, though, is the drugmaker's healthy long-term outlook. Despite these patent losses, Pfizer should be able to post low-single-digit top-line growth for a long time to come, and that's not even accounting for additional business development activities that might create further upside. Pfizer's dividend, in turn, should be a safe bet for investors on the hunt for a reliable source of passive income.

Matt DiLallo (TerraForm Power): Renewable energy producer TerraForm Power has a checkered history when it comes to paying dividends. The wind and solar power generator had to stop paying its dividend a few years ago when its former parent company declared bankruptcy. TerraForm, however, now has a new parent, which has helped turn around its financial results and growth prospects. That enabled the company to start paying a dividend again last year.

TerraForm anticipates that it can generate enough cash from its much-improved renewable operations to grow its dividend -- which currently yields 5.6% -- at a 5% to 8% annual rate through at least 2022. Further, it can deliver that healthy growth rate while maintaining a conservative payout ratio of about 80% to 85% of its cash flow. That will leave it with enough excess cash to invest in the expansion projects needed to support its dividend growth plan.

The company should have no problem finding growth opportunities in the future, given that the world needs to invest a jaw-dropping $10 trillion to wean the economy off its addiction to fossil fuels.


TerraForm already has three projects in development that would increase the power-generating capacity of its existing wind farms. In addition to that, TerraForm is in the process of acquiring a small portfolio of solar projects from a third-party developer.


The company's ability to build and buy additional renewable-power-generating assets should enable it to continue growing its cash flow for years to come. That should allow TerraForm to keep paying dividends to its investors in the decades ahead.

Rich Duprey (Hershey): This is the year Hershey is smashing records, and its stock has soared to an all-time high of $138 per share after the chocolatier found its sweet spot. Ironically, it's not because of chocolate that the confectioner is gaining, but rather the snack foods acquisitions its made, such as SkinnyPop popcorn and Smart Puffs.


Not that the chocolate business was bad -- Hershey even saw its e-commerce efforts start to pay off, with sales growing 50% in the first quarter -- but the snacks company is now a more well-rounded business.

It's a smart transition Hershey is making, as consumers have become more health conscious, and eating chocolate, while still a guilty pleasure for many, is being pressured, which is why Hershey sought to diversify away from it.


The company may have taken longer to make the switch than it should have, but now that management made the decision, it is implementing the process smartly, cutting costs where necessary, shedding underperforming brands, and boosting its more successful ones, all the while keeping an eye out for more acquisitions to make.

Hershey trades at almost 23 times projected earnings, which isn't overwrought, and analysts see it growing earnings at 8% annually. Hershey has paid a dividend every year since 1930, and has a long history of raising its payout every year, except 2009 when it froze it, before resuming the next year and increasing it at an average rate of nearly 10% per year. The dividend currently yields 2.1%.

While Hershey has been a fairly reliable performer over the years, returning almost 14,000% since the 1960s, when you add in reinvested dividends, total returns jump to over 30,000%. While past performance is no indicator of future results, Hershey has proven itself to be a stock that one might want to count on to pay them for the rest of their life.


To conclude reading up on dividends bank, energy, tech metals I want in on the stockmarket if I can travel and buy shoes, car go to a Spa. I can invest in stocks; marijuana stocks are looking good.


The opportunities for cannabis producers to capitalize on strong and rising demand have grown.


Given the incentive to invest available capital toward future growth, most marijuana stocks don't pay a dividend.
Dividend earrings