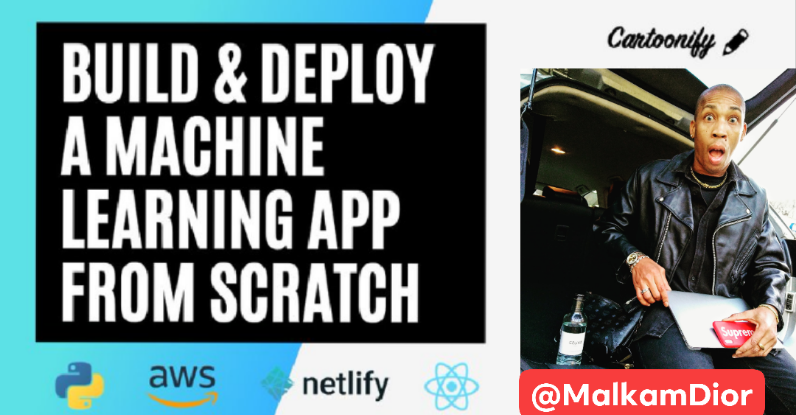 Have you ever wanted to build a machine learning application with a heavy model on the backend, a React user-friendly interface on the frontend, and a serverless cloud architecture all around so that your product is scalable to tens, hundreds, or even thousands of users?

Well, this is not as difficult as it sounds, and in this article, I will show how to build an application like this. To make this tutorial a bit fun, I’ll walk through the process of building Cartoonify.

Cartoonify is a toy application I made from scratch to turn pictures into cartoons. I know this may seem a bit funny, but believe me, there is serious work behind this app that you can leverage elsewhere. I’ll let you read this post to believe me 😀 or check the code on my Github.

Here’s what motivated me in starting this project:

Building Cartoonify was so fun I decided to talk about it a video series. Here’s a short introduction:

0. Prerequisites to build and deploy Cartoonify 🛠

If you want to run and deploy Cartoonify, here are some prerequisites first:

If you’ve got everything, you’re now ready to go.

This section provides some details about the model. If you’re not interested in it, you can move to the next part about deployment.

The main idea behind this network

Before testing CartoonGAN, the model behind this application, let’s talk about it first to understand the underlying architecture and how it was designed and trained to produce cartoon styles.

CartoonGAN has been introduced in 2018 in this paper with the goal of transforming images into the style of different Japanese cartoons. What CartoonGAN achieves is called style transfer, an image transformation technique that has been first introduced with neural networks in 2015 thanks to the work of Leon A. Gatys on Neural Style Transfer. Style transfer has later been enhanced in 2017 with CycleGAN architectures. CycleGAN approached style transfer by formalizing it as a translation problem between two image distributions whereas Neural Style Transfer framed it as an optimization problem.

The authors went even further to make CartoonGAN’s results as visually appealing as possible: to do this, they added a second loss that forces the generator in creating smooth edges, low-shaded colours, and less textured areas because these are visual features that are very specific to cartoons.

A GAN is composed of two networks: a Generator and a Discriminator.

The goal of the generator is to take some input data (or noise) and create samples that look like a real-world image distribution and the goal of the discriminator is to learn a boundary between the fake samples and the real ones.

At the beginning of the training, these two networks are very bad in their respective tasks and once the training goes on, they get better and better.

and what about generating cartoons?

Training a GAN to generate cartoon data from real photographs is a simple problem that can be framed by considering:

The beauty with this setup is that you don’t need a one-to-one mapping between photographs and cartoons: this means in practice that if you want to train a custom CartoonGAN to generate your favourite cartoon (let’s say the Simpsons for example), all you have to do then is gather some Simpson images and real photographs with no correspondence whatsoever and then start your training.

To learn more about the training procedure behind CartoonGAN, have a look at the original paper.

Let’s now move to a more hands-on section, where we get to generate cartoon results ourselves.

First clone the repo of this project.

Download the four pretrained models first. These weights will be loaded inside the Generator model defined in cartoongan/network/Transformer.py

To test one of the four models, head over the notebook cartoongan/notebooks/CartoonGAN.ipynb and change the input image path to your test image.
This notebook calls thecartoongan/test_from_code.py script to make the transformation.

The transform method takes a load_size argument to resize the input image in order to speed up the transformation. If you set it to a high value, the results will look better but the processing will take more time. Throughout this project, we’ll set load_size to 450.

Here are some results obtained with a load_size of 800.

You can watch this section on Youtube to learn more about GANs, the CartoonGAN model and how to build the script test_from_code.py used in transforming the images.

The goal of this section is to deploy the CartoonGAN model on a serverless architecture so that it can be requested through an API endpoint … from anywhere on the internet 🌐.

Why does a serverless architecture matter?

In a serverless architecture using Lambda functions, for example, you don’t have to provision servers yourself. Roughly speaking, you only write the code that’ll be executed and list its dependencies and AWS will manage the servers for you automatically and take care of the infrastructure.

This has a lot of benefits:

Of course, Serverless architectures cannot be a perfect fit for any use-case. In some situations, they are not practical at all (need for real-time or quick responses, use of WebSockets, heavy processing, etc.).

Since I frequently build machine learning models and integrate them into web applications for inference only, I found that a serverless architecture was interesting in these specific use-cases.

Let’s have a look at the architecture of the app before deploying the lambda function:

— The backend and the frontend communicate with each other over HTTP requests. Here is the workflow:

We are going to define and deploy this architecture by writing it as a YAML file using the Serverless framework: an open-source tool to automate deployment to AWS, Azure, Google Cloud, etc.

Isn’t this cool, writing your infrastructure as code?

1 — Install the Serverless framework on your machine

2 — Create an IAM user on AWS with administrator access and name it cartoonify. Then configure serverless with this user’s credentials (I won’t show you mine 😄 — put yours, buddy)

4 — Install two Serverless plugins to manage the Lambda dependencies and prevent the cold start of the lambda function:

5 — Create a folder called network inside backend and put the following two files in it:

6 — Modify the serverless.yml file with the following sections:

7 — List the dependencies inside requirements.txt (at the same level of serverless.yml)

8 — Create an src folder inside backend and put handler.py in it to define the lambda function. Then modify handler.py.

and finally, the lambda_handler that will be triggered by the API Gateway:

Now you’re done. The file structure of the backend should now look like this:

Deployment may take up to 10 minutes, so go grab a ☕️.

What happens here, among many things, is that docker will build an image of the Lambda deployment package, then Serverless will extract the dependencies of this environment in a zip before uploading to S3.

Once the lambda function deployed, you’ll be prompted a URL of the API that you can request.

Go to jupyter notebook to test it by loading an image, converting it to base64 and sending it inside a payload.

If you want to follow this section step by step so that you don’t miss anything, you can watch it on Youtube.

This section covers building a simple React interface to interact with the model.

I wanted this interface to be as user-friendly as possible to visualize the style transformation in a very simple way.

I hopefully found this nice react component that allows to compare two images side by side and go from one to another by sliding a cursor.

Before running the React app and building it, you’ll need to specify the API URL of the model you just deployed.
Go inside fontend/src/api.js and change the value of baseUrl

This will create thebuild/folder that contains a build of the application to be served on Netlify.

You can watch this section on Youtube to understand how the code is structured, and the other React components being used.

4. Deploy the React app on Netlify

In this last section, we’ll cover deploying the front interface.

There are many ways to deploy a React app so that it goes live on the internet and anyone can have access to it. One of them is using Netlify: a great platform that automates building and deploying applications in many frameworks (React, Vue, Gatsby, etc.)

Netlify will ask you for the build folder (enter build) and a custom name for your app (this will appear as a subdomain of netlify.com). I’ve already picked cartoonify but you can choose another one 😄.

And this should be it! now your app is live! 💻

But wait? there’s some wrong with the URL: it’s prefixed with an alphanumerical code — I didn’t want that, right?

That’s because you deployed a draft URL!

To have a clean URL, you’ll have to deploy by specifying the prod option:

You can watch this section on Youtube for a live demo to understand how easy the deployment on Netlify can be.

If you’ve made this far, I sincerely thank you for your time!

If you like this project and want to improve it, be my guest: I’m open to pull requests and here’s the repo of the project.

If you have a machine learning project where you need to quickly deploy an API on the cloud and request it through a custom frontend, this project should be a boilerplate to kickstart your work, so feel free to reuse the code.